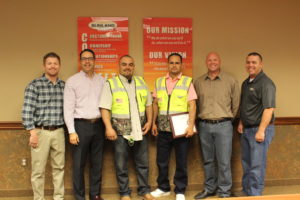 Adrian Mendoza and Julian Leon from Sunland’s Phoenix office received the ‘Above and Beyond’ Safety Award.  Adrian and Julian were presented this award for taking the time while working to help an older gentleman who had fallen in the middle of Thomas Road. They turned their vehicle around, set up cones to help divert traffic around the man and waited with him until the ambulance arrived. Not only did they perform such a profound act of kindness, they also were incredibly humble and did not mention this incident to anyone. Sunland became aware of this act of kindness when the man who had fallen, as well as other bystanders, called in to ask who they could thank. Adrian and Julian upheld every one of Sunland’s CORE values when they went out of their way for someone who truly needed help.

Congratulations, Adrian and Julian, and thank you for showing our community what Sunland’s CORE values are all about!