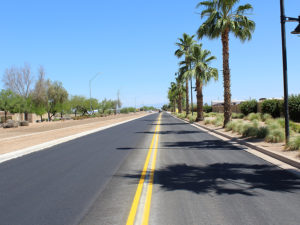 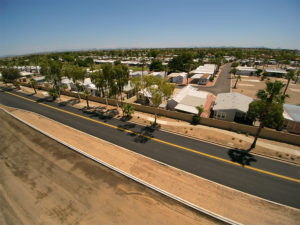 The $31.5-million road improvement project aims to increase road capacity, improve traffic safety and make way for the city’s growing population and local business sector.  Construction began in August 2015 and is expected to be completed in August 2017. Residents can expect road closures and restrictions along Thunderbird Road from 127th Avenue to El Frio Street, and El Mirage Road from Grand Avenue to Northern Avenue.

Christopher Hauser, an assistant city engineer for El Mirage, said, “We need a 21st-century road because we are a 21st­century city that is a part of a major metropolis -of Phoenix metro. With these road improvements, we’re hoping or generate further economic stimulants and growth here in the city.”  During the past 60 years, the number of residents has more than quadrupled in El Mirage to more than 30,000.

Tempe-based Sunland Asphalt is the project’s principal contractor. It is in charge of phase two, three and four, which includes all road improvements except for the southern strip of El Mirage Road from Northern Avenue to Peoria Road. Maricopa County is responsible for phase one construction.  The project is part of the Arterial Life Cycle Program, established by the Maricopa Association of Governors. El Mirage will be reimbursed up to a maximum of $25.7 million by the county. Funding for the Arterial Life Cycle Program comes from the county’s half-cent sales tax.

The project currently consists of 14 main subcontractors and three main utility and communication partners, said Mark Soyster, Sunland Vice President, and acting project manager. Cox Communication, Century Link, and APS are working closely with Sunland to ensure the safe relocation of utilities, which has posed the greatest challenge during construction. “The underground utilities have been very unstable,” Soyster said. “We’ve had some issues getting the existing utilities, the underground utilities, and power and communication utilities relocated.”

El Mirage Road is the only street in the West Valley that runs continuously from north to south and was deemed a “road of significance” by the Maricopa Association of Governments, Hauser said.

For more information on these projects, click HERE and HERE.

This article was published in the Summer 2016 issue of Arizona Contractor & Community magazine and was written by Tamara Juarez. Tamara is a student reporter at Arizona State University’s Walter Cronkite School of Journalism and Mass Communication.