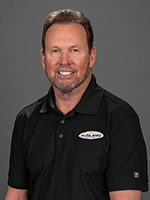 Doug DeClusin is the founder and CEO of Sunland Asphalt & Construction, Inc. An active participant in the construction industry, DeClusin has been a member of the Associated General Contractors of America – Arizona Chapter since 2007, and was Chairman of the Board of Directors for the Arizona Chapter in 2013 and 2014. Doug has received multiple accolades throughout his career including the Construction Financial Management Association’s (CFMA) Construction Executive of the Year and the Phoenix Business Journal’s CEO of the Year. He is an active member of Greater Phoenix Leadership and the Executives’ Association of Greater Phoenix, and has been an enthusiastic supporter of charities such as Lead Guitar, Horses Help, The Boys & Girls Club, Ronald McDonald House, MLCC Charities as well as the ASU Del E. Webb School of Construction.