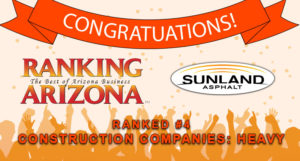 Thank you for voting Sunland Asphalt as one of the top Heavy Construction companies in the Valley!