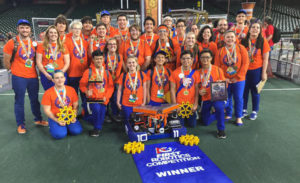 FIRST (For Inspiration & Recognition of Science & Technology) Robotics is a program that inspires creativity and ingenuity by challenging students to create robots that compete in specific challenges. There are different levels of the program, starting with FIRST Lego League Jr., which works with elementary students to build simple robots using Legos, all the way to the FIRST Robotics Competition which involves high school students in regional and national competitions with full-fledged robots. For the FIRST Robotics Competition, students are given a very specific set of criteria around the first of the year, as well as the materials they are allowed to use to build the robots and they have only 46 days to complete the robot. Robots are required to be wireless and all programming is done by the students. 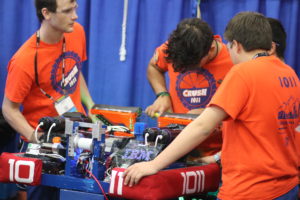 It isn’t just bragging rights and trophies on the line for these students. Many universities and companies send scouts to these events to pick up the best and brightest minds in the STEM (Science, Technology, Engineering & Math) fields. Focus on Science and Technology with high school students is a particularly important and difficult feat that the FIRST Robotics Competition accomplishes exceedingly well, as there are over 400 teams who competed in the FIRST Robotics World Competition this year alone.

In addition to building robots, the FIRST Robotics program also encourages students to participate in community outreach, as well as finding their own sponsors. Sponsors include companies like NASA, Raytheon, Monsanto and 3M, and they provide either monetary support for the teams to compete (around $5,000 is needed for each team to participate in the World Competition) or raw materials and equipment for building the robots may also be donated.

Congratulations again to the CRUSH team for their winning robot design. We hope these young innovators continue working hard and piquing their interest in STEM related fields!

Click HERE to check out this clip from KVOA Tucson, covering the success of the CRUSH Team.